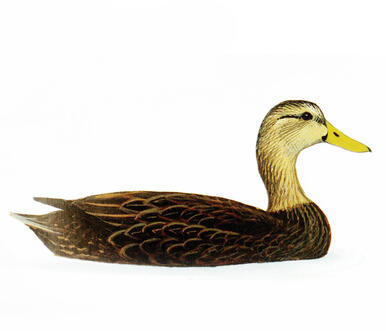 Everglades, Rio Grande Valley, Salton Sea – these are just a few of the places that are so often touted as some of the most interesting and important areas for birds in the U.S. But there is another — Louisiana’s Mississippi River Delta. Louisiana is already known as the Sportman’s Paradise, but it is also a bird’s paradise.

The scale of Louisiana’s wetland landscape is unparalleled, having 40% of the coastal wetlands in the entire country. It is the 5th largest delta system in the world and the largest in the Western Hemisphere. Consequently, this means that huge numbers of birds nest here too.

Louisiana Ranks #1 in population of many important bird species

A recent paper published in the June 2019 issue of the Wilson Journal of Ornithology that I co-authored in collaboration with researchers at Louisiana State University, Louisiana Department of Wildlife and Fisheries, and Abt Associates, Inc. demonstrates just how significant coastal Louisiana is for supporting massive bird populations. Among the 16 conservation priority species and subspecies we examined (plus one hybrid swarm, the “Chandeleur” Gull found nowhere else in the world), 14 of them are more populous in Louisiana than in any other Gulf Coast state. Not everything is bigger in Texas! Louisiana ranks #1 in population of Mottled Ducks, Royal Terns, Black Skimmers, Wilson’s Plovers, and many other important species. Louisiana even ranks #1 in the country for its state bird – the Brown Pelican – a species that was eradicated in the 1960s by DDT but is now flourishing due to reintroduction efforts and nesting island restoration.

Birds are under threat by Louisiana’s land loss crisis

Unfortunately, these birds are under tremendous threat, as they live in a collapsing river delta. Over 2,000 square miles (about the size of Delaware) have been lost to open water in the last 80 years, and land loss continues to be one of the greatest threats to bird habitat. Nesting islands are eroding away, marsh-dwelling species are seeing habitat fragmentation as it sinks and becomes water, and beach-nesting species are seeing their nests washed away as seas rise.

One species already illustrating the devastating consequences of land loss is the Black Skimmer, a beach-nesting species found primarily on offshore islands. Although Louisiana still supports more nesting Black Skimmers than any other Gulf state, the current population estimate is only 30% of what it was in the 1970s. The rippling effects that coastal land loss could have on regional bird populations is frightening and deserves the attention of bird-lovers around the country.

Urgent action is needed to save these birds and their habitats. Fortunately, Louisiana has the Coastal Master Plan to guide state-wide protection and restoration efforts that will benefit bird habitat across the coast. This bi-partisan plan outlines the projects needed to maximize the sustainability of the landscape not only for people, but also for wildlife and fisheries.

Without the Master Plan, Louisiana could lose an additional 2,250 square miles of land over the next 50 years, putting our communities, economy, natural resources and wildlife at risk. Swift, decision action and bold, large-scale restoration efforts are needed for coastal Louisiana to remain a bird’s paradise.