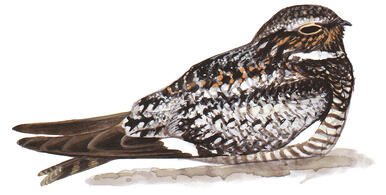 Restoration of Louisiana barrier islands and shorelines is not only vital to the health of coastal Louisiana, but also to hundreds of thousands of nesting birds. Those that lay their eggs on the sand, called beach-nesting birds, are among the fastest group of declining birds in North America, and they rely on this critical habitat for survival. Over the last 80 years, over 1800 miles of coastal forests, marshes, beaches and barrier islands have been converted to open water in Louisiana. For this reason, Audubon Louisiana strongly supports urgent and timely coastal habitat restoration. However, a “build it and they will come” approach to beach restoration projects may not always be the most effective approach to recover beach-nesting bird populations.

Louisiana’s barrier islands and mainland sandy beaches are home to many species of nesting birds, including the Wilson’s Plover, Least Tern, and Common Nighthawk. These nesting birds lay their eggs on the ground and depend on the sandy terrain to camouflage and protect their flightless chicks from predators. Several other species (Royal Tern, Black Skimmer, Brown Pelican, etc.) nest only on offshore barrier islands, where they are more isolated from predators and disturbance. So how do Wilson’s Plovers, Least Terns, and Common Nighthawks cope with nesting on mainland beaches where predators such as coyotes, raccoons, rodents, and crows threaten their eggs and chicks? (Some of these meso-predators also live on barrier islands, but their diversity and abundance on the mainland is often much greater).

The Least Tern, Wilson’s Plover, and Common Nighthawk are what I consider early-successional species, meaning that they prefer nesting in habitats that have recently been disturbed or “reset” back to an initial state. Introductory ecology classes often teach students about lichens, mosses, and other early successional plants and animals as the beginnings of the rise to a forest. But a fire, storm, or plague of insects can reset the forest back to its early successional state. Beaches can be thought of in the same light, and are generally maintained in an early successional state through regular and constant disturbance, like wave and wind action (daily), light or occasional storms and overwash (monthly to yearly), and large hurricanes (decanally).

The Least Tern is perhaps the most early successional of Louisiana’s mainland beach-nesting bird trio. Their nesting colonies are highly dynamic, shifting in location and size from year to year, and often even within a year. They are experts at finding “new sand” that has seen its vegetation scoured away by a recent storm or other disturbance. It is no coincidence that the number of hurricanes between 1851 and 2004 in each state explains 42.1% of the variability in populations of Least Terns from state to state. Other factors, such as habitat loss through human development and relative amount of available habitat per mile of shoreline explains additional variability.

So how do Least Terns respond when we finish a dune renourishment restoration project?

In many ways, these restoration projects create early successional habitat, and nesting Least Terns numbers respond. For example, the Holly Beach Dune renourishment project, completed in March 2014, provided habitat for 382 pairs of Least Terns during the summer of 2014, which dropped to 83 pairs in 2015, and 50 pairs in 2016. Although we do not have numbers from just before the project, a 2005 survey reported fewer than 31 pairs (Zdravkovic 2005).

The big question, however, is whether these birds are successful at nesting on their beautiful new restoration project. Some evidence we present in our 2015 and 2016 Beach-nesting Bird Stewardship reports suggests “probably not,” especially if you consider that in each successive year, the nesting population dropped substantially. On Holly Beach and the western Caminada Headlands in 2016 (where construction completed 2-3 years before), only 21% of Least Tern nests hatched, compared to 37% on eight other beaches in south Louisiana. Furthermore, on the two restored beaches, 36% of nests were lost to depredation, compared to only 16% on the other beaches.

Certainly, it is possible that Holly Beach and Caminada have always been full of predators. Before the dune renourishment project on nearby Elmer’s Island in 2016 (the eastern stretch of the Caminada Headland), only 1 out of 49 Least Tern nests hatched. The  project was recenlty completed in December of 2016, and we are eager to see the effects in 2017. I predict that we will see a large increase in Least Tern numbers, but similarly dismal nesting success if we do nothing…the classic definition of an ecological trap.

What can we do about this?

Culling coyote populations is time intensive, and never permanently removes a population, but can sometimes be effective in the short-term. In 2017, Audubon Louisiana will instead experiment with electric fencing, similar to what is used for small farm animals, to keep mammalian predators out of important tern colonies. Our staff will provide updates throughout the season on our progress, so check in with our Facebook and Twitter feeds for the latest information.

The broader point, however, is that the “build it and they will come” approach to coastal restoration may not always be appropriate. Understanding restoration-predator-prey dynamics has important implications, especially for Natural Resource Damage Assessment (NRDA) penalty dollars aimed to recover bird and wildlife populations impacted by the Deepwater Horizon oil spill. Putting habitat on the ground is obviously a good start, but understanding and refining management strategies after restoration construction completes should be an important component of our coastal restoration strategy to ensure that functioning ecosystems are reestablished.